In 2011 Waternet started investigating a smarter way to monitor the chemical water quality. Because more than 100,000 substances can be present in the water cycle, a chemical substances analysis will never be complete. That is why the SIMONI strategy (smart integrated monitoring) not only looks at individual substances, but especially at the effects of the entire mixture of substances. At present, the SIMONI strategy is increasingly being applied in the Netherlands and may play a future role in the European Water Framework Directive (WFD).

Although it appears that our surface waters become cleaner, known and new chemical micropollutants still threaten the aquatic ecology. Micropollutants is a collective term for a large group of substances with different applications and different chemical properties, including hormones, medicines, pesticides, biocides, plasticizers, fire retardants, per- and polyfluoroalkyl substances, fragrances, UV filters, antioxidants and much more. The risks of these micropollutants can be analyzed in two ways. The traditional risk analysis is performed by comparing the results of chemical analyses of target substances with environmental quality standards (EQS). EQS are only available for a limited group of substances, while hundreds of thousands of substances can occur in the water. Therefore, this risk analysis will never be complete. An alternative risk analysis is performed by measuring the effects of the whole extractable mixture of substances with a battery of biological effect measurements (bioassays). This alternative holistic method does not only consider the tip, but the entire iceberg ... 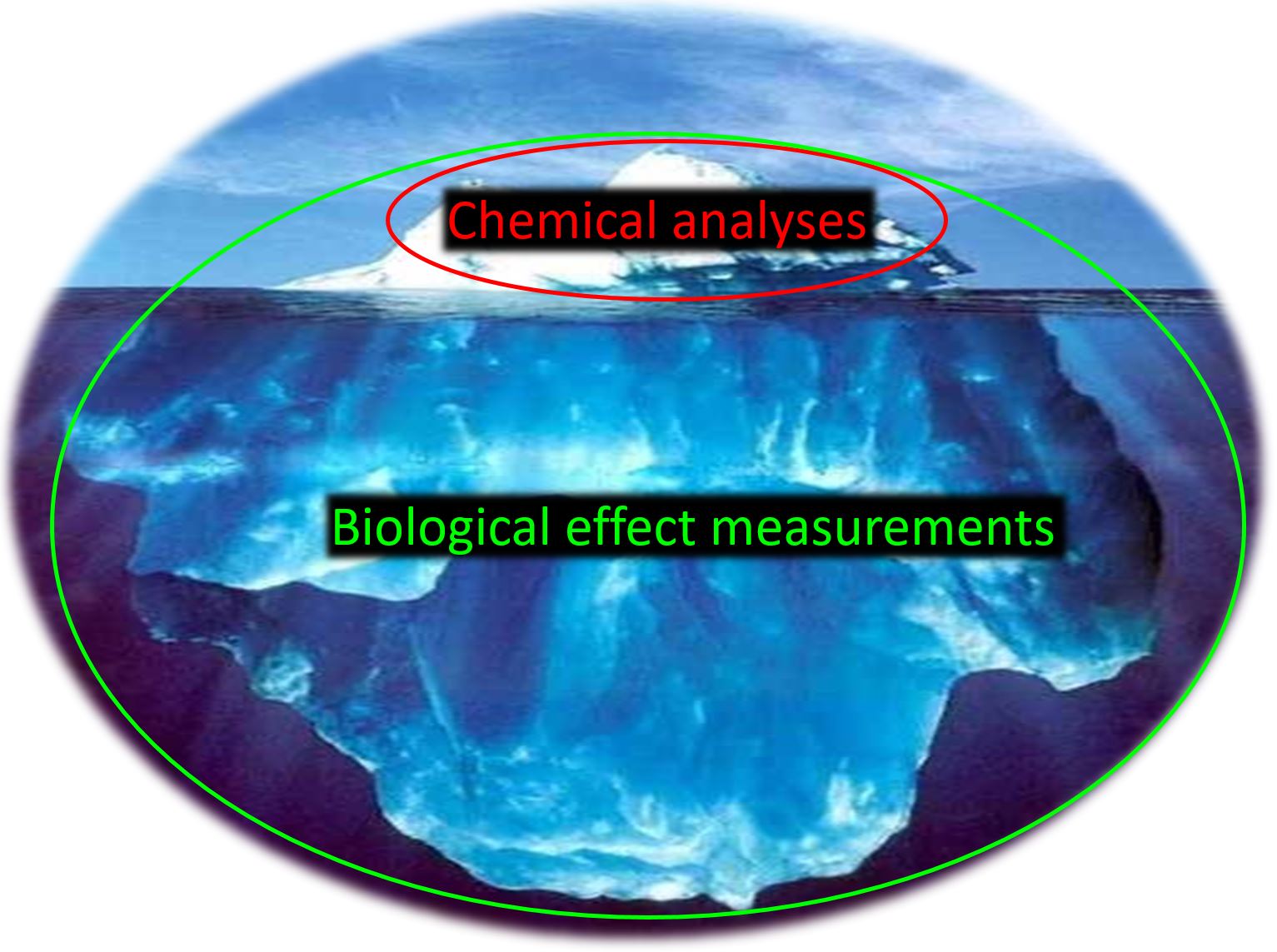 For the SIMONI method, the water is sampled with passive sampling (PS). PS are materials that are deployed in the water for several weeks and accumulate the same substances as aquatic organisms. So they can actually be considered as "artificial fish". During PS, a Daphnia (water flea) bioassay is also performed in the field, measuring survival after one week of exposure. After the deployment of the passive samplers, their extracts are tested in the laboratory with a battery of bioassays (biological effect measurements with living organisms or cells). Both the general and the specific toxicity of the substance mixture is assessed. General toxicity measures non-specific effects on survival, growth or reproduction in cells, bacteria, algae and water fleas. The specific effects, measured with cell cultures, assess the sensitivity to substances with a certain mode of action, such as endocrine disruption and genotoxicity. With the results of fifteen bioassays, SIMONI gives an indication whether or not the mixture of environmental pollutants is an ecotoxicological risk.

Deployment of cages with passive samplers

Bioassays are able to determine potential risks of the mixture of (un)known organic substances and their degradation products. Because bioassays can be very sensitive, not all measured effects indicate a risk to the ecology. Therefore, effect-based trigger values (EBT) were developed to determine the significance of all observed biological effects. These EBT have been determined with aquatic toxicity data of many substances that have significant effects in the bioassays as well as with background values ​​of the bioassays at locations with a good ecological status. The EBT can be considered as environmental guidelines for bioassays, to be used as indicators of ecological risks. A first impression of the environmental risks can be obtained by comparing all bioassay results with their EBT. If a bioassay effect exceeds its EBT, this indicates a potentially increased environmental risk.

Because a slight exceedance of one of the EBT does not necessarily mean a hazard for the ecology, a model has been developed to provide an indication for the environmental risk based on all bioassay results, the SIMONI Risk Indication (SRI). In the tier 1 screening, the SRI is determined by calculating a weighted average of all bioassay results relative to the EBT. The model has been calibrated on the basis of field validation at the area in and around the City of Amsterdam, so that an SRI >1 is indicative of an increased environmental risk from micropollutants. An SRI between 0.5 and 1 indicates that influences of micropollutants are already measurable, but environmental risks are still acceptable. An SRI <0.5 is considered to indicate low environmental risks. Because the results of bioassays do not reveal which substances cause the effects, a further chemical-toxicological study is carried out at the locations with the highest SRI in a tier 2 risk assessment. The scheme of the SIMONI strategy is shown in the figure below. 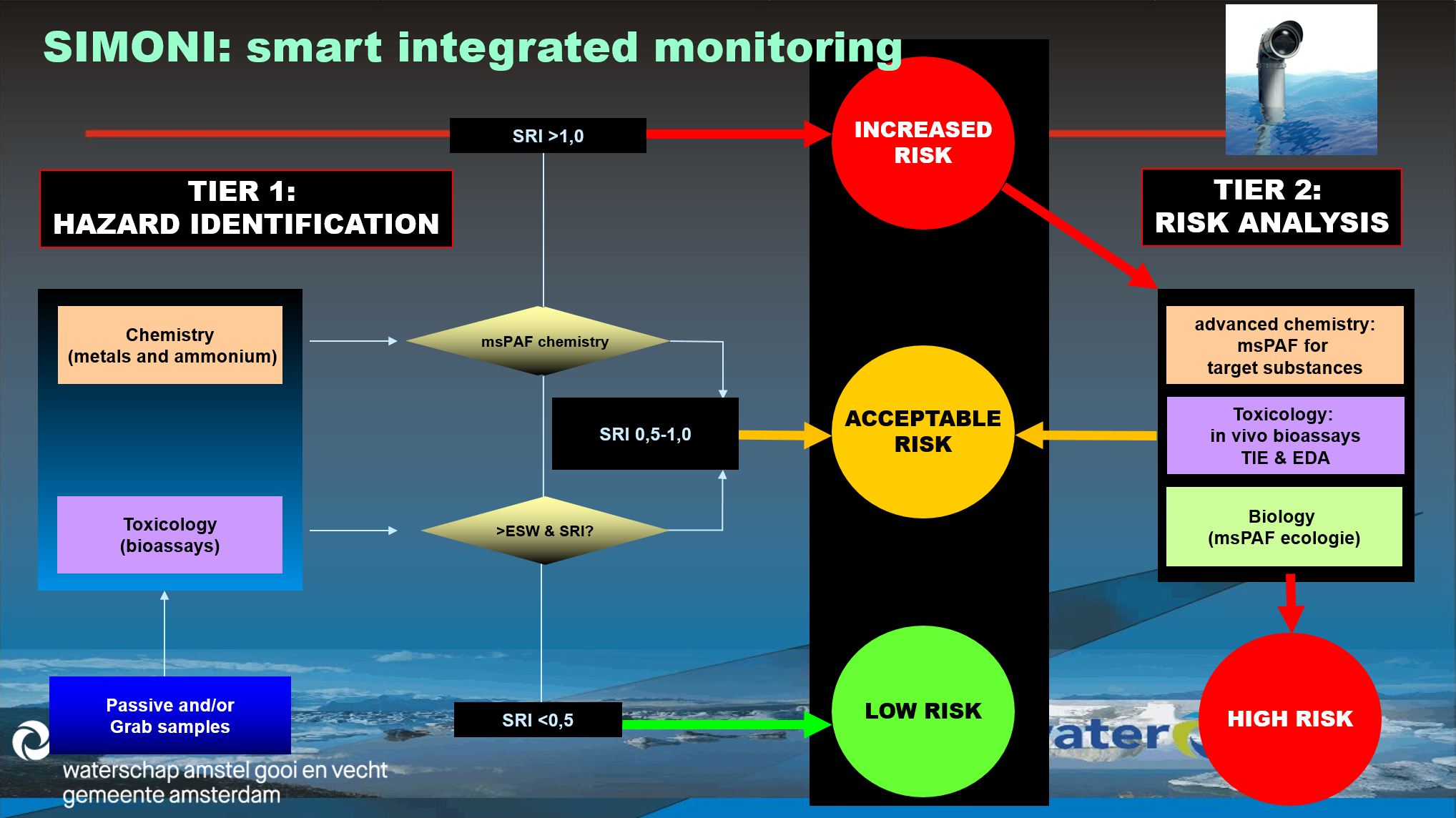 Schematic representation of the SIMONI strategy

Since 2015, the SIMONI strategy is being used as the toxicology track of the Ecological Key Factor Toxicity (EKFT), in which an innovative chemical risk analysis is performed by two tracks. With the chemical track, measured substance concentrations are used to calculate the toxic pressure by model analysis of the potentially affected fraction of aquatic organisms (msPAF). The SIMONI method is used as the toxicology track, analysing the effects of the entire mixture of substances with bioassays and estimating the environmental risk with the SRI.

Applications of SIMONI in the Netherlands

At the Waternet Institute for the Urban Water Cycle, the SIMONI model is used to assess the chemical quality of the water cycle, i.e. surface water, waste water and drinking water. The map below shows the locations that were investigated with the SIMONI strategy in the period 2011-2018. Highest ecological risks were found at sites contaminated with greenhouse horticulture pollutants, undiluted WWTP effluents, sewer overflows, landfills and marinas. Because the model is included in the EKFT, it is also used in the rest of the Netherlands to monitor chemical water quality. The SIMONI method has been applied, for example, to map out the environmental risks of rubber granulate on artificial grass pitches, where slightly increased environmental risks were demonstrated in the drainage water. Many water managers are using SIMONI to investigate if the results of a theoretical national hotspot analysis for WWTPs can also be measured in practice. A number of Dutch water managers are subsidized by the state to equip WWTPs with additional purification for the removal of micropollutants. The Dutch government has decided that their efficiency must be investigated with both chemical analyses and SIMONI effect measurements.

Sites at the Amsterdam area with SIMONI Risk Indication (SRI) due to micropollutants: low risk (green), acceptable risk (yellow) and increased risk (red) for the ecology.

Research for the development of SIMONI 2.0

At present, several studies are being conducted to optimize the SIMONI model. In a doctoral research at the University of Amsterdam, various parts of the model are improved and substantiated. Commissioned by the Dutch government, an investigation has been carried out to optimize the SIMONI model for use with WWTP effluents. In this case the sampling is not performed with passive sampling, but with a large-volume solid phase water extraction (LV-SPE). Since the extraction method may have an impact on EBT background values, these must also be determined for the alternative methods. To this end, there is collaboration with the Dutch Knowledge Impulse Water Quality (KIWQ), a large national study into assessment and improvement of water quality, in which micropollutants play an important role. If all goes well, the improved SIMONI 2.0 model can be presented in 2021. 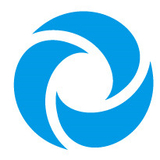